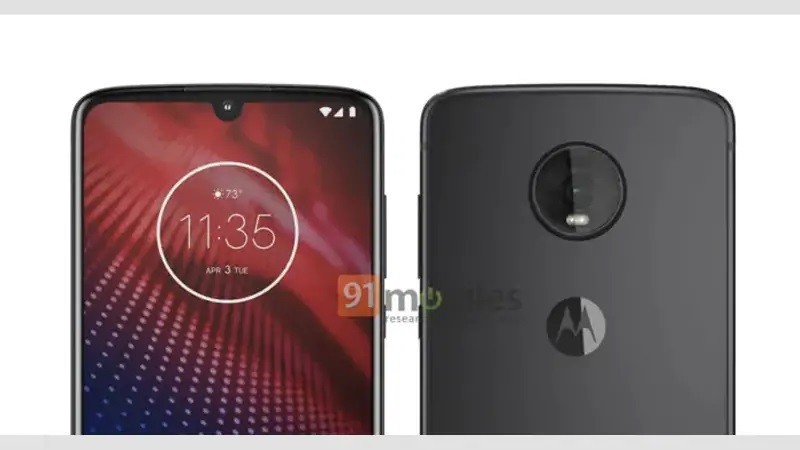 Motorola’s Z series smartphones still stuck with a modular concept which was appealing two years ago. Most of the other smartphone manufacturers have departed from making modular smartphones, but Motorola is still coming up with modular phones. When Motorola launched its flagship Z3, they also showcased a Moto Mod. It has enabled smartphone’s 5G connectivity. It seems that Motorola is working on Z3’s successor which will likely to be called Moto Z4.

For quite some time, Motorola has been working on the new upcoming phone. Recently leaked renders have given us a glimpse of the look of the forthcoming smartphone device. 91Mobiles posted the alleged design of Moto Z4 which almost similar to Moto Z3. The new smartphone will have waterdrop style notch with an edge-to-edge display. The notch houses the front camera. The waterdrop notch of Moto Z4 looks similar to Moto G7. Moto G7 will launch in India very soon.

The leaked render suggests the Moto Z4 will sport a single 48-megapixel shooter which might be a Sony sensor. Like most of the other Moto Z series smartphones, Z4 will also feature a 16-pin pogo connector which will be at the back. With the Moto Mods, it can be used. The look of the smartphone is dated; but it seems in order to ensure compatibility with previous Moto Mods, Motorola has to go by the same design.

The new device may ship with Android Pie with few customizations of Motorola on top of it. It will have a USB Type-C port and also expected to retain a 3.5 mm headphone socket.