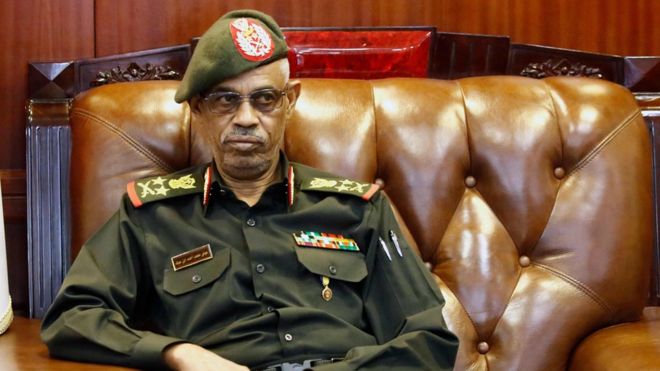 Sudan’s Defense Minister Awad Ibn Auf has stepped down after leading a coup to oustlongtime leader Omar alBadhor   This came as a wave of protests continued to hit the streets with protesters claiming he was too close to Mr. Bashir. Announcing his decision on state T.V, the head of Sudan’s military council named Lt-GenAbdel Fattah Abdelrahman Burhan as his successor. Mr. Bashir’s downfall comes after months of protests in the country which began in December amid the rising prices. The army is expected to stay in power for two years before eventually holding free and fair elections.

Mr. Ibn Auf who served as head of military intelligence in the 2000s during the Darfur conflict is facing sanctions from the US which were imposed on him in 2007. His resignation was followed with chants of t fell again” from protesters who had refused to leave the streets. The Sudan Professionals Association, a group behind the protests termed Mr. Ibn Auf’s decision to step down as a victory for all the demonstrators. They are also demanding for a smooth transition of government from the military to civilian rule before they can finally come back home.

Lt-Gen Abdel Fatteh Abfelrahman Burhan, the man in charge is believed to have a clean record as per reports from the AP. He has even made an effort to meet with the protesters in order to hear what they have to say. Despite the ousting of President Bashir on Thursday, protesters refused to disperse, with most of them setting camp outside the army’s headquarters in Khartoum. This was done in defiance of a curfew which had been put in place by the military. On Friday, Sudan’s military council spokesman said the army was not planning to stay in power but instead would listen to the views of protesters. Whether this is going to be put in place is still a mystery to the many protesters who wanted change.