The United States military are planning to move their forces from the Turkish border with Northern Syria. This comes after the White House said Turkey would soon begin an operation in a part of Northern Syria where it plans to settle Syrian refugees. As per reports from a U.S official who has direct knowledge to the situation, The U.S has not received any orders to commence a large scale withdrawal from the region, remaining in a “wait and see” position.

In a statement that was released Sunday night, the White House said Turkey would “soon be moving forward with its long planned operation” in Northern Syria. This came after United States President Donald Trump spoke by phone with Turkish President Recep Tayyip. However, President Trump remained defiant on the issue tweeting on Monday, “The Kurds fought with us, but we paid massive amounts of money and equipment to do so. They have been fighting Turkey for decades. I held off this fight for almost three years, but it is time to get out of these ridiculous endless wars, many of them tribal, and bring our soldiers home.”

According to a U.S official, the U.S military said this Turkish operation could be launched “at any time.” However, the American forces have at the moment cut all ties and coordination with the Turkish military, and therefore, they do not expect any advanced warning from Turkey as to when or how the operation is going to commence.  This is a major blow to the Kurdish led Syrian Democratic Forces (SDF)relied upon by the United States as the most effective fighting force against ISIS. 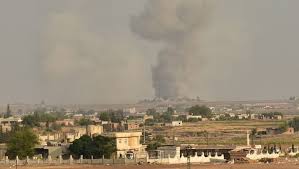 On Monday, the official spokesperson of the SDF, Mustafa Bali said the U.S decision to stand aside as Turkey moves into Syria was “shocking and unexpected.” Bali termed the decision ‘a huge mistake’ that will allow ISIS to “reunite itself and appear again stronger than before.”

“We at the SDF believe that everything we achieved in the last five years, and all the sacrifices we made to defeat ISIS will all be destroyed with the latest American decision,” Bali said. “It seems that the policy of the United States is to betray their friends and allies,” he added.  In a tweet, Erdogan’s spokesperson Ibrahim Kalin said Turkey will continue to fight against ISIS and will not allow it to return “in any shape and form.”

The 12-member Syria Study Group has warned in their latest report that the war in Syria is far from over and ISIS is still a threat.  This contradicts the White House’s claim that ISIS had been defeated.  Panos Moumtzis, regional humanitarian coordinator for the Syria crisis with the United Nations said the U.N had drawn up contingency plans to reach people who might flee south with food and medical aid. “We are hoping for the best but preparing for the worst,” he said while addressing reporters in Geneva.

Premier One Payments: A Reputable High-Risk Merchant Service Provider worth...

Alina - February 25, 2021
PremieroneFinding the best high-risk merchant provider near you is easier said than done. With merchant service providers popping-up almost every other day, it might...

What to Expect When You Use Junk Removal Services

Alina - February 24, 2021
Junk AwayFor anyone running a home or business, junk will always be part of the picture. No matter how hard you strive to maintain...

Alina - February 23, 2021
BookmeOnline booking systems seem to be attracting the attention of many business owners. And that does not comes as a surprise if the numerous...