Blue origin has performed their first ever hotfire test of the engine that they are planning to use on their Blue Moon lunar lander. This first test took place on June 18 at NASA’s Marshall Space Flight Center. On June 19, the founder of Blue Origin, Jeff Bezos, tweeted about the test having taken place the previous day. In his tweet, Jeff Bezos said the 35-second test went ahead as expected. “Data looks great and hardware is in perfect condition” he wrote in his posts. The tweet included a video of how the test took place.

On May 9, the company had announced the BE-7 engine in an event where they also unveiled their updated design of the Blue Moon lander. The lander will be able tocarry 3.6 metric tons of cargo to the lunar surface. To make it even better, it contains a “stretch tank” version that increases the total capacity to 6.5 metric tons. This larger version of the Blue Moon Lander will have the capabilities to carry an ascent stage to enable crewed mission to the lunar surface.

The Blue Moon lander will be powered by a single BE-7 engine. This engine is capable of producing 10,000 pounds force of thrust. To work effectively, the BE-7 engine uses liquid oxygen and liquid hydrogen propellants. This action has leveraged the company’s experience on their larger BE-3 engine that is currently being used on their New Shepard suborbital vehicle. The BE-3 engine is also used in their New Glenn orbital rocket. 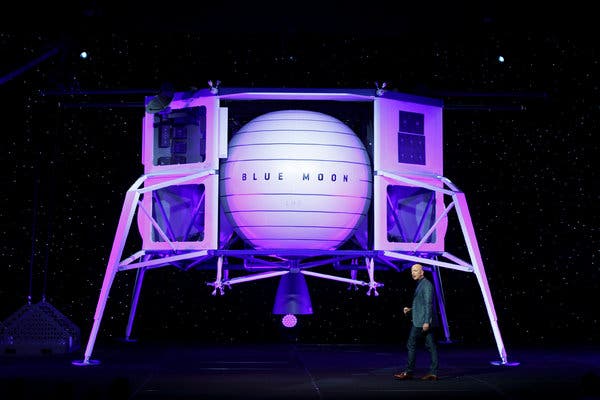 Why Liquid Oxygen and Liquid Hydrogen

During their event in May, Bezossaid the company opted to go with liquid oxygen and liquid hydrogen for the BE-7 engine due to the fact that they have a high performance. Furthermore, the two liquid gases allows the Blue Moon Lander to make full use of the situ resources that are present on the moon in form of water ice that could be easily converted into hydrogen and oxygen.When launching the engine in May, Bezos said, they were going to be able to get hydrogen from that water in the moon and refuel their vehicles on the surface of the moon. Apparently, the company has been working on this project for so many years.

Blue Moon are already working closely with NASA on the agency’s plan aimed at returning humans to the surface of the moon. This company is among the 11 that received contracts from NASA on May 16 in order to perform studies and the initial development of the lunar lander descent stages and transfer prototype vehicles. Blue Moon Company is expected to partake in a separate call aimed at proposals later this year for work on integrated lunar lander systems. The successful test by Blue Moon is a step in the right direction when it comes to making space exploration better.